The Beginning of the Story…

Austin Classical really began at a birthday party in early 2012. Over cupcakes, long-time friends Anna Marshall and Dusty Kinslow were discussing the different educational options available to their young children. Both were educators, both had always assumed that they would educate their children the traditional way, and both were surprised by a new determination they and their husbands felt to seek other methods of education. 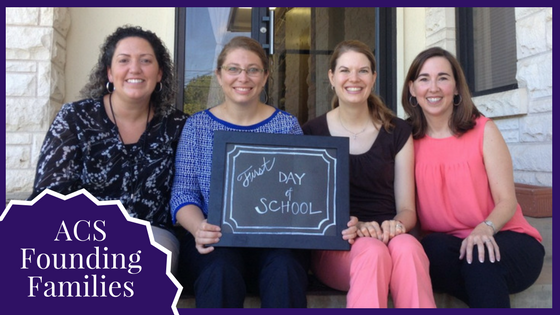 Dusty jokingly said, “Well, maybe we should just start our own school.” Little did she know that Anna would come back to this conversation in the weeks ahead as she began making connections with other like-minded families.

Anna introduced Dusty to Cici Scott. Harry and Cici Scott had been considering a classical education for their children, but were not interested in either a full-time private school or homeschool. Dusty had been researching this hybrid model of education and became enamored with the revolutionary blend of professional teaching and homeschool for her own children. The classical method paired with the blended schedule seemed to be the best of both worlds.

Anna, Cici, and Dusty began meeting regularly to pray and to research. The three also attended the Association of Christian and Classical Schools conference where the decision to move forward with the school was solidified.

From there, the Kinslows, Marshalls, and Scotts hosted several meetings to invite other families onto the launch team. Glenn and Stephanie Lucke joined the Austin Classical team in the fall of 2012.

The ACS team began meeting weekly to pray, to plan, and to do the work necessary to open a school. God also provided key insight into the start-up process by connecting the team with Providence Preparatory School in Belton, Texas. The gracious people of Providence mentored our fledgling ACS launch team through each step of the process, providing invaluable and candid guidance when we needed it most.  The Society of Classical Learning and the National Association of University-Model Schools were also valuable resources to us.

In early 2013, God answered our prayers with a wonderful location for our school in central Austin. He also blessed us with amazing teachers, students and their families for our inaugural school year. God’s faithful care for us and abundant provision have been evident every step of the way, and our joy and gratitude was palpable as we officially launched Austin Classical School on August 12, 2013, with 10 “First Families” and 13 students in grades K, 1st, 2nd, and 4th.

As we begin our 8th year of school this year, we thank the Lord for His steadfast love, faithfulness, and care for us. He has done far more than we could ask or think. To Him be the glory! We have grown to 100+ ACS families and more than 200 students in Pre-K through 9th grades and look forward to adding a grade per year in the coming years.

Christy Risinger, MD, President of the Board

Christy and her husband Matt have been part of the ACS community since the school began in 2013. They have four children, Alivia, Will, John and Matthew, who cover grades within the Schools of Grammar, Logic, and Rhetoric. For the past two years, Christy has served as Secretary for the ACS School Board and will now transition to serving as Board President beginning June 2020.

Christy and Matt have been married since 1999 and are partners of the Austin Stone – St. John Campus. They are both thankful for the ACS community and the rich relationships that this school has brought into their lives and the lives of their four children.

Brian Riley, Vice President of the Board

Brian, his wife Karen, and their daughter (currently in 7th grade) have been a part of the ACS community from the first year of the school in 2013.  They have one son who graduated (K-12) from another classical blended-modeled Christian school, Veritas, and is attending college and playing baseball. They have another daughter who is a current student at Veritas’ School of Rhetoric (11th grade) and is active in the performing arts.

For the past three years, Brian has served on the Board and provided insight for the Grammar, Logic, and Rhetoric stages of the school.  He was also the former head of the HSEC (Head of School Support and Evaluation Committee).

Since 2002, Brian has been a recruiting consultant for various clients in Central Texas and beyond.  He grew up in Houston, graduated from the University of Texas, and has lived in Austin with Karen (married 27 years) ever since.  Brian is an elder at the downtown congregation of the Austin Stone Community Church.

The ACS community has been a blessing to the Riley family.  Karen teaches Art to Grammar students at ACS and feels privileged to mold their creativity in a classical Christian setting.  Brian and Karen also feel fortunate to have a community of friends that love and accept their daughter in a way that is life-giving to her.

Anna Marshall, Secretary of the Board

The Marshalls, Anna and her husband Jeff, are one of the founding families at Austin Classical School. They have two boys, Levi and Luke, who are reaping the many benefits of the rich learning environment and the classical curriculum of ACS.

Anna has been involved in education for most of her life. She earned a Bachelor in Science in Mathematics at Wheaton College in Illinois, where she began her admiration for the Liberal Arts tradition. Anna continued her involvement in education when she moved to Austin to teach mathematics in an area high school for 9 years.

Anna and Jeff are members of Grace & Peace Church, PCA, where they both have attended and served on the diaconate since the church’s inception in 2015. She is so thankful that Classical Christian Education is becoming more accessible to children all over the world and especially in Austin, where, through Austin Classical School, they’ve seen it flourish thanks only to God’s great mercy and provision.

The Brownfield family joined the ACS community in the fall of 2017. Matt and his wife, Lauren, have three children who all attend ACS. Lauren is a committed co-teacher as well as a Latin instructor in the School of Logic. The Brownfields are members at Grace + Peace Austin.

After graduating from Patrick Henry College (’05) with a degree in Government, Matt entered the Masters in Politics program at the University of Dallas. Later, he transferred into the doctoral program in Political Philosophy at UD’s Institute for Philosophic Studies, an interdisciplinary Ph.D. program that trains scholars in the great books of the western tradition. Upon completing his doctoral coursework, he left the University of Dallas with an M.A. in Politics (’08)—doctoral dissertation pending. It is still pending.

Since the fall of 2008, Matt has worked full-time in electoral politics. He is a founding Partner at Murphy Nasica & Associates, a full-service political consulting firm that works on behalf of candidates and initiatives at the local, state, and federal levels.

Matt and Lauren both believe deeply in the classical model for education. As products of the homeschooling movement, they also appreciate the structure provided by the collaborative model. They love the ACS community and the big smiles on their girls’ faces as they head into the classroom each campus day.

Erin Minor and her husband Jon have been a part of Austin Classical School since 2014. They have three children, Colton (6th), JP (5th), and Abby (3rd) who have all attended the school since Kindergarten.

Erin started her career at Merrill Lynch in 2001. She later joined RCG and served as a Sr. Wealth Manager and Partner at Resource Consulting Group in Austin, TX for the last 18 years. She has maintained her Certified Financial Planner (CFP) designation since 2005. She currently serves on the Board of National Christian Foundation  (NCF), a US non-profit organization that assists donors in donating to charitable causes accepting non-cash assets focused primarily on Christian givers. She enjoys teaching Dave Ramsey’s Financial Peace University in her spare time, as well as camping, exercise, and community.

Erin and Jon are members of Grace Covenant Church and have been married for 16 years. The ACS community has been a blessing to their family these last six years.

Kevin and his wife Amanda have been part of the ACS community since 2015.  They have three children, Addi, Stella, and Jude, that cover grades within the Schools of Grammar and Logic.

Kevin graduated with a BBA in Finance from The University of Texas at Austin and began working in finance and operations for a software company in Austin.  In 2008, Kevin earned an MBA with a concentration in entrepreneurship from UT and went on to work in strategy, finance, HR, operations, and M&A for another Austin-based software company.  He is currently the Chief Operating Officer for Apogee, a managed services provider for higher education.

Kevin and Amanda have been married since 2007 and are members of Wayside Communities Church, a church-plant in the Great Hills neighborhood where they live.  Kevin is an elder and Amanda leads the women’s ministry.  They have loved ACS since joining, especially the great community and Christ-centered education that it offers.

To contact our Board of Directors, please send an email.

Meet our Faculty and Staff