We have a saying around our hallways that “our teachers are the curriculum” – and we absolutely cherish that idea. We have some wonderfully-talented instructors in each and every grade level, and we get the opportunity to meet as a team monthly, to invest in each other and learn from each other.

One of our recent Faculty Meetings took on a bit of a different flavor as building blocks came out and everyone got to work “building” a school. The team has been reading through Teaching and the Christian Imagination, which uses various metaphors to describe teaching, including the metaphor of building. So why not build?

Logic Teacher Jennifer Borders gave us a bit more insight into exactly what the task was, and what it had to do with Classical Christian education.

What was the task given at the Faculty meeting?
We were to build a school with various building toys (Legos, linking blocks, and such). We were told to build it and be prepared to talk about the choices we made “architecturally”.

What was the end result?
Four different groups had fun creating four different, colorful buildings. My group created a fairly symmetrical building, with windows, a little path leading to the front door, triangular accents on the roof, and lots of color!

We determined that the symmetry was to represent our roots in the Greco-Roman tradition, the windows were there to let in God’s “light” and to also be seen by the world and avoid exclusion. We decided the path was to represent the narrow path to God, the triangles represented the Trinity and also the Trivium, and the color represented the diversity (racially, culturally, etc) of God’s children.

Can you elaborate on the building metaphor?
I don’t know if this is truly an elaboration, but a comparison. I thought literally when I considered building a school, and then considered what examples from Christian history or the Bible do we have, and I recalled the building of the Temple. The Israelites were constantly building and rebuilding the Temple to house the ark of the covenant to have a place that would be holy for God to dwell with us. It was always being destroyed from foreign invaders, but ultimately, God’s children no longer have a need for a temple because He sent the Holy Spirit to dwell within us after Jesus’ death, burial, and resurrection. (Not to mention the temple’s curtain to the holiest of Holies was ripped from top to bottom, negating its purpose.)

However, we still have not given up the practice of meeting and require a place to meet, and so we have church buildings. A school is like this. We’re building ACS, and so we require a school building to meet and learn together. But the act of building of the school will not be to house God, but rather to bring Him honor and glory. What we learn in the church, we take out into the world to be light. With God’s grace, what our students learn in class they also will take out into the world and be light and salt.

How do you see that play out in a School of Logic classroom?
I see Logic students have remembered the truth that was taught to them in Grammar school and they have kept that truth and stored it in their hearts. It is truly the most precious thing to see. But what I aim to do in the School of Logic is get them to think, evaluate, and measure. Why is this truth The Truth? What if we considered an “alternate” truth? Does that truth still hold up against biblical truths? Did this character in the novel do the “right” moral thing? Why or why not? What would have been a better plan?

It’s wise to know the truth, absolutely. But life isn’t always so clear-cut for us. Things can seem right and God’s plan for us, and then He reveals that it is not so, and He has something better. Our School of Logic is about how to think critically, and how to make a judgment and decision. God wants us to know His word, but He also wants to us to be discerning and be light to the world. No, we don’t have to send our children out into the world just yet, but that day is coming and we want them to be prepared. This is how we prepare them. 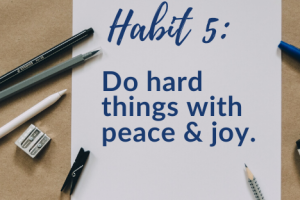